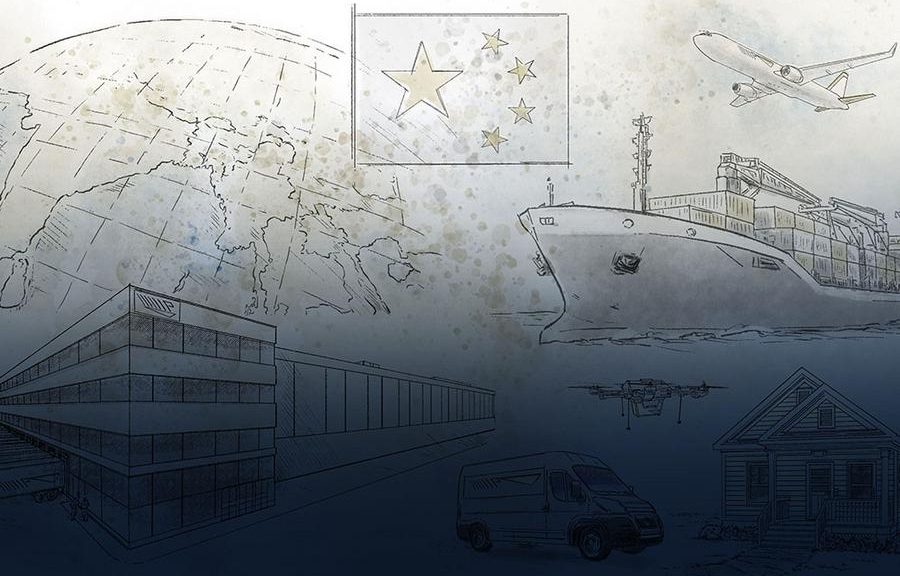 Rich Thompson was the kind of shopper who’d buy a dress shirt at the mall and never dreamed of ordering groceries online. That was before Covid-19.

Six months into the pandemic’s disruption of the global economy, Thompson now laughs at the idea of browsing food aisles, unloading his shopping cart, waiting in line for checkout and then loading items into his trunk.

“I just think about how insane that is,” said Thompson, who is based in Chicago. “I’ll never go to a grocery store again.”

His perspective is worth noting: As head of the global supply chain and logistics team at JLL Inc., Thompson is watching — and assisting — his industrial and big- box retail clients in a race to meet surging demand for rapid shipping to consumers’ doorsteps, often within two days. What was already a fast-gaining trend before the pandemic has only accelerated since its onset, as manufacturers have shifted facilities outside China and U.S. distributors are thundering into spaces long considered the domain of local retailers and malls. The scarcities seen in the early stages of the pandemic (e.g., toilet paper) set in motion a domino effect that is putting a premium on warehouse space and breathing new life into lesser-known U.S. seaports and air-cargo stations.

In short, the pandemic has dramatically bolstered the fundamentals of industrial real estate at a time when office, retail and hospitality properties are suffering from declining occupancies and investor interest.

“This has been a catalyst that condensed 10 years of transformation into two,” said Greg Healy, a Los Angeles-based senior vice president with Colliers International who leads the firm’s supply chain and consulting team.

It’s been enough for JLL to launch a new retail-industrial practice group to help D.C.-area landlords figure out how to convert their retail footprints into new online commerce hubs. It’s a natural transition, said John Dettleff, a senior managing director specializing in industrial and flex industrial space in JLL’s Tysons office. “If you need immediate fulfillment space,” he told the Washington Business Journal, “there’s a lot of good retail spaces that, in some cases, can actually be a good, big, open space, typically with lots of parking.”

E-commerce spending grew roughly 30% in the second quarter versus the prior three months — even as overall retail sales declined nearly 4%, according to federal data. For some big-box retailers, the shift was a revelation.

At Target Corp., online sales spiked 195% on a year-over-year basis in its most- recent quarter. Walmart Inc.’s online sales nearly doubled, as did Home Depot Inc.’s. At a largely online retailer such as Amazon.com Inc., which is building its second headquarters in Arlington, its online sales grew 36% in the first six months of this year compared with the same period last year.

The upswing in online spending is fueling unprecedented demand for warehouse space, as evidenced by Amazon’s own push for new warehouse space in Gaithersburg as well as other last-mile distribution facilities in Prince George’s County.

In July, JLL said e-commerce accounted for about 50% of its industrial leasing activity, versus about 35% before the pandemic. Though still early, the rapid rise in demand is expected to inflate industrial rents and entice speculative warehouse development in the months ahead, real estate experts predict. Already, JLL forecasts that e-commerce sales will hit $1.5 trillion by the end of 2025, driving demand for 1 billion square feet of new industrial real estate in the U.S. — a 6%

increase over existing inventory. In the D.C. region, the vacancy rate for industrial space shrunk from about 12% in 2009 to about 6.2% by this past July, per JLL.

China isn’t losing its status as a manufacturing powerhouse anytime soon, Colliers’ Healy said. However, he and other logistics experts said China’s early struggles with coronavirus pushed manufacturers to minimize their risk with facilities in other Asian countries — a strategy insiders coined “China plus one.” Other countries in Central and South America also benefited, having already become more attractive since the Trump administration imposed tariffs on billions of dollars in Chinese imports in 2018.

The changes could prove a boon to ports along the East Coast and Gulf Coast like Port Houston and Port Tampa Bay, whereas today the majority of cargo-container traffic enters the U.S. through the Port of Los Angeles. Healy said industrial markets in Phoenix, Houston and San Antonio also stand to gain.

“To Singapore and west, if you move to Bangladesh and India, it tends to be cheaper to flow through the Suez Canal and come into the East Coast,” said Joe Dunlap, managing director and leader of the supply chain advisory practice group at CBRE Inc. “Some of us are expecting to see that strengthen East Coast ports. I don’t know how much — that’s the $64 million question.”

Similar distribution channels are emerging from regional airports as retailers attempt to keep pace with Amazon.com Inc.’s air-cargo hubs. Ben Conwell, a senior managing director at Cushman & Wakefield, predicted that a wave of new air- cargo traffic and development is on the way.

Conwell would know. Based in Seattle, he runs Cushman’s e-commerce advisory group and previously was director of logistics real estate for Amazon’s fulfillment services subsidiary in North America. He said the “significant” increase in air-cargo shipments over the next decade will put many lesser-known airports on the map as major hubs — John F. Kennedy International Airport in New York, Los Angeles International Airport and O’Hare International Airport in Chicago among them — have become increasingly congested.

He pointed to a new $33 million air-cargo hub at South Carolina’s Greenville- Spartanburg International Airport and a 26,000-acre mixed-use development at Fort Worth Alliance Airport in Texas as examples of where the supply chain’s evolution will be felt strongest.

Retailers traditionally used a single warehouse and a few smaller distribution sites to support stores within a certain geographic footprint. However, the two-day shipping race, fueled by Covid-19’s disruption, has blown up that model in six short months.

Investment is pouring into supersized regional warehouses with added storage capacities. Conwell said the push now includes properties in midtier markets and a progression toward smaller population areas. It’s also prompting a wave of innovation in a subset of commercial real estate long overshadowed by its more dynamic hospitality, retail and office cousins.

“Every retailer is looking at online sales and direct-to-consumer shipping,” JLL’s Thompson said. “If you weren’t already doing it, you’re dead in the water right now.”

“Seniors are a totally new market. They’re very interested in having groceries delivered out of necessity,” Healy said.

For all the transformation, there’s a consensus that e-commerce delivery is still in its infancy.

“It’s still the Wild West when it comes to e-commerce,” Healy said. “Obviously, there are some players that have established positions, but I still think there is a lot of disruption that will take place as the consumer changes.”