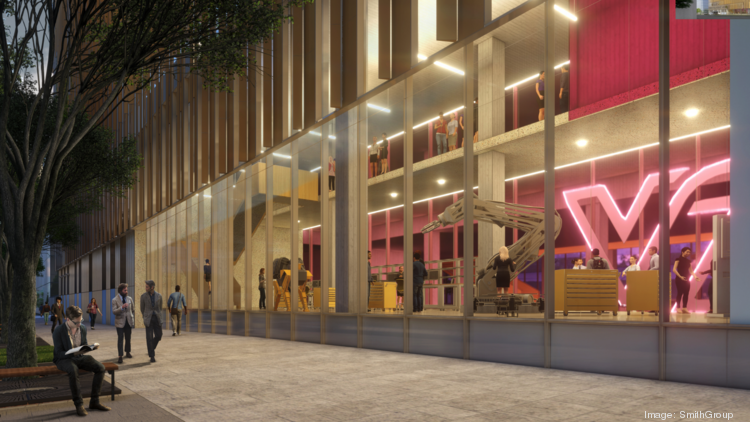 The first phase of Virginia Tech’s campus and plans for six other buildings in Alexandria’s section of Potomac Yard earned approval from City Council on Saturday morning.

Developers JBG Smith Properties (NYS:JBGS) and Lionstone Investment have reenvisioned the entire district and brought it through the city’s planning process in a little over a year after they earned the university’s $1 billion computer science-focused campus after it exited a nearby site.

The breakneck speed of approval and navigating more than 30 planning meetings was a conscious “commitment” by the city, developers and university to have the graduate school’s first building ready and open for the fall 2024 class, said Cathy Puskar, a land-use attorney with Walsh, Colucci, Lubeley & Walsh who represented JBG Smith.

“Despite a pandemic and other interruptions, everyone has held to that schedule,” she said. “It has really been a herculean effort and we are really excited to be here today”

The campus was brought into reality by the arrival of Amazon.com Inc.’s (NASDAQ: AMZN) second headquarters in Arlington and a promise from the state of Virginia to help fund the tech talent pipeline that would help the company hire the roughly 25,000 workers it promised to employ in the region.

The redevelopment of the 18.75-acre site — where a closed Regal Cinemas location and massive surface parking now sit — is the first step of a larger plan that developers JBG Smith and Houston-based Lionstone Investments have for the larger 67-acre expanse. That includes the entire strip mall east of the Richmond Highway, between the shuttered Pier 1 Imports storefront and the new National Industries for the Blind headquarters.

The project is not the “same old, same old” said Alexandria Mayor Justin Wilson just before the project was approved.

Virginia Tech’s three planned innovation campus buildings, in maroon, sit north of six mixed-use buildings in this part of Potomac Yard. This site plan shows the blocks where those buildings — a significant portion of which will house office space — will sit.

Outside of Virginia Tech’s building, the other six buildings, designed by five different architectural firms, are a combined 1.2 million square feet. Altogether, they are expected to include roughly 475 residential units, 753,000 square feet of office and 91,000 square feet of ground-floor retail and amenity spaces, according to the city’s staff report. The project would also entail more than 57,000 square feet of public and private open space.

Councilwoman Del Pepper expressed some concern that landlord JBG Smith might not be able to fill all of the office and that much of the development might turn to residential.

“Never mind the Metro station [coming] here. Never mind we have all these amenities, or that we have great views, blah, blah, blah,” Pepper said. “My fear is that you won’t be able to fill them and that we’ll end of with too much residential.”

True enough, the Covid-19 crisis has emptied most of the offices across the region. Many employers don’t expect to be back in the office before summer 2021 and some are likely to allow much more telework after the pandemic is resolved.

Still, the to-be-built offices around the Virginia Tech campus are attracting lots of interest, said Bailey Edelson, senior vice president at JBG Smith during the meeting.

“I will say in the middle of the pandemic, the interest is lower these days,” she said. “But we’ve had more interest on this site because the Metro location and the campus than we’ve had in any other location. So we are very hopeful that we will do everything we’ve shown you in these plans.”

The plan approved by the city notes that developers aren’t likely to start construction on the residential or office building closest to the Metro until years after Virginia Tech’s academic building comes online. The developers would like to gauge demand and respond “to market forces,” according to the city’s staff report. For the residential area, they estimate a groundbreaking closer to 2025 and 2027.

Virginia Tech’s innovation campus will anchor the development. The first structure, designed by SmithGroup, is expected to be an 11-story, 300,000-square-foot academic building and the flagship of the university’s graduate campus. Its unique shape is designed to capture sunlight through the photovoltaic panels lining its surface and convert it to energy — technology aimed at helping the building achieve a Silver rating from the U.S. Green Building Council.

New York-based Cookfox Architects has designed a nine-story, 250,000-square-foot office building to the south of Virginia Tech’s planned building. It would include ground-floor retail and a publicly accessible, but privately owned open space called the “Market Lawn.” That aims to deliver in fall 2024.

Hickok Cole is tasked with designing a tower south of the first university building. That seven-story building would include some-240,000 square feet of office space, as well as a lobby and ground-floor retail. It is also where Virginia Tech plans to lease office and host “collaborative incubator space,” the staff report notes. It’s slated to wrap up in 2024.

The Cookfox team is also designing an eight-story, 163,500-square-foot building, which will sit in front of the Metro station. The designer is also working on a 1,300-square-foot plaza where commuters will exit and enter the station and transfer to buses. Additionally, Elkus Manfredi Architects of Boston will design a building near the Metro station. It’s expected to be a six-story office building totaling about 156,000 square feet.

An aerial drawing of the Alexandria section of North Potomac Yard includes the Virginia Tech Innovation Campus at the top right.

While the project is approved, developers will continue to work with city staff to finalize more site plan elements and review building permits before construction could start, a city spokesperson told the Washington Business Journal