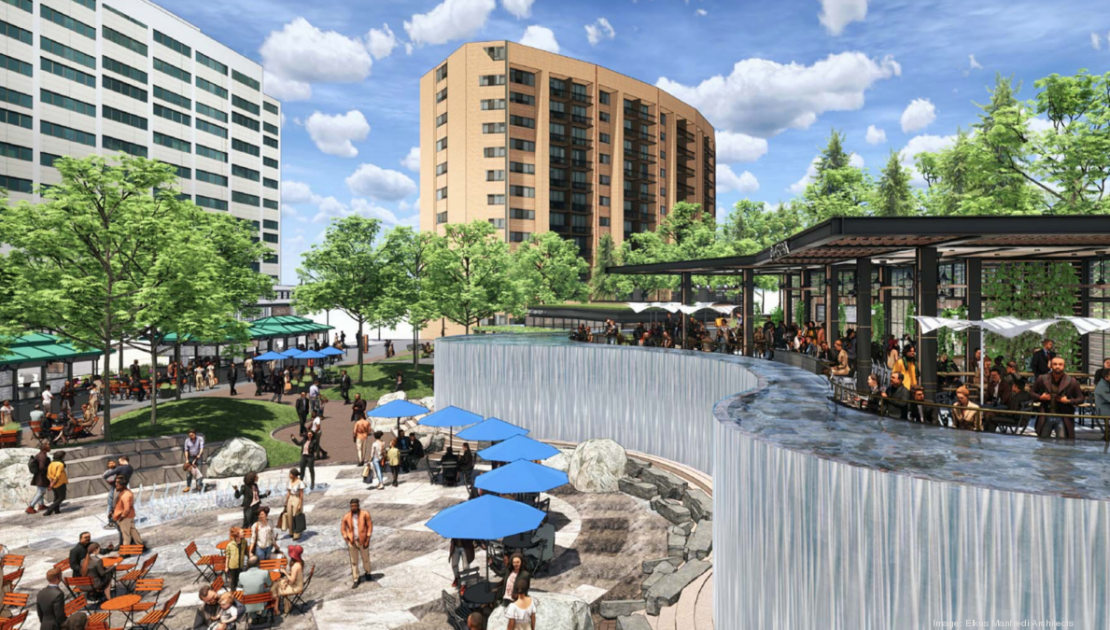 JBG Smith Properties (NYSE: JBGS) is pitching a major makeover for a small park at the heart of its Crystal City holdings, envisioning some new retail and even a bar atop a water feature.

The developer filed plans with Arlington County earlier this month requesting an additional 6,100 square feet of density for the 1.6-acre park, located across the street from

JBG Smith’s massive “Central District” project at 1770 Crystal Drive. The company, the dominant landowner in the area and Amazon.com Inc’s HQ2 landlord, also hopes to give the existing features in the “Crystal City Water Park” a bit of a facelift.

The plans call for eight new “retail kiosks” along Crystal Drive, with 300 square feet available in each, matching a small kiosk selling food and drinks on the site already. JBG Smith is also pitching a 2,200-square-foot restaurant with 119 indoor seats and 50 outdoor seats in a covered pavilion.

There’s also a new “water bar,” a 752-square-foot outdoor bar with 144 seats in a very unusual location: directly atop an existing wall fountain, providing an elevated view of the neighborhood.

Kedrick Whitmore, a land-use attorney at Venable LLP representing JBG Smith, wrote in a letter to county planners that these changes to the park are intended to

“increase its prominence as a community focal point.” The developer hopes the new retail will “promote activation within the park while still maintaining sufficient open space area and permeability and visibility into the park,” he added.

“The applicant’s proposal will improve the landscaping, enhance the connection to Mount Vernon Trail, create a formal promenade streetscape for pedestrian use, create a new performance area, increase outdoor seating, preserve and update the existing water fountain and include additional water elements and other features that will make the water park site more usable and interactive for people,” Whitmore wrote.

The application does indeed include a new trailhead facility, bike parking and bathrooms close to the new trail entrance. The company is also hoping to connect the park to the new Virginia Railway Express station set to be built nearby, which JBG Smith is helping to design. The developer could even take the lead on building it someday, or look to rename it to feature its preferred moniker for the neighborhood, “National Landing.”

The company has taken a similar strategy for the new Crystal City Metro entrance across the street from the park, offering to build it on the county’s behalf to better coordinate its design with the Central District project.

Work on that effort is proceeding apace, with the renovation of 1770 Crystal Drive essentially complete — it is 97.8% preleased to Amazon, per JBG Smith. There’s also a host of new retail on the way for the block, including an Alamo Drafthouse Cinema and a specialty grocer that JBG Smith has so far declined to identify – however, permit applications describing a store as having a “self app check out” suggest Amazon could be involved in some capacity as the tech giant expands its self-checkout Amazon Go stores around the D.C. region.

Other recent permit applications suggest that JBG Smith has secured other retail tenants for the building at 1550 Crystal Drive, including a taco restaurant from the New York City chain Tacombi and a Mah-Ze-Dahr bakery. The latter just opened its first D.C. location in Navy Yard.