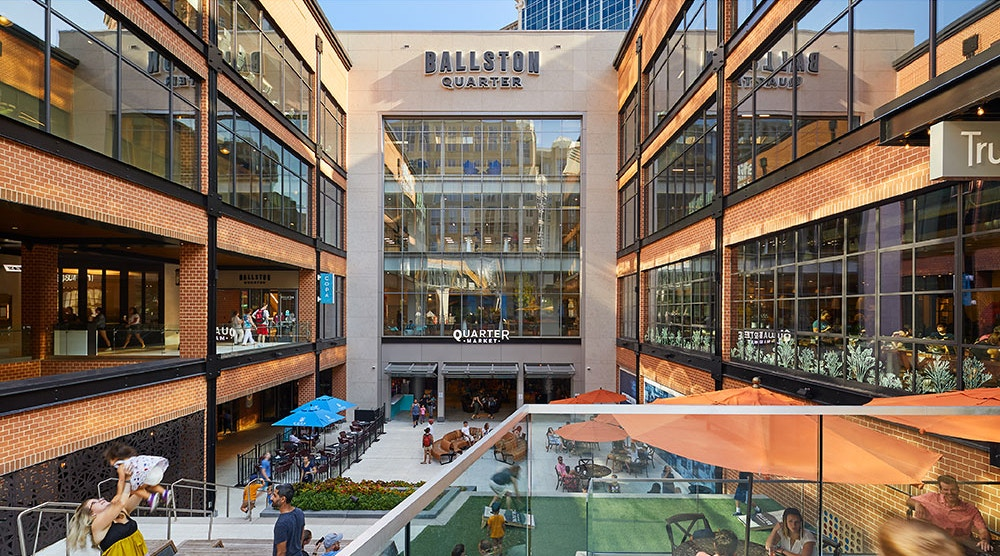 Turning a mall inside out is a lofty task, but Brookfield Properties was up for the challenge. Now, the owner of Ballston Quarter is facing a bigger one in Covid-19.

Ballston Quarter, the redevelopment of the former Ballston Common Mall, delivered in the first quarter of 2019. It was a major and much- needed undertaking. The nearly 70-year-old center had struggled in recent years as previous owner Forest City Washington plotted an overhaul to respond to an increasingly challenging retail landscape that put more stock into town centers than the traditional mall.

What the landlord landed on was much more in line with how people use shopping destinations today. There is the now-omnipresent food hall in Quarter Market, ample outdoor space and plans to program the main plaza. Like so many revamped interior malls today, it’s a restaurant- and entertainment-heavy venue. But this

“experiential” makeover still faces the same challenges as traditional malls in the era of Covid.

Brookfield, which acquired Forest City mid-construction in 2018, was still leasing up Ballston Quarter when Covid hit — it got more than halfway to full, the company said. The Ballston Quarter website lists several stores and restaurants as “coming soon,” including bartaco and Whino, and it’s unclear if any existing tenants have shuttered.

Ballston Quarter has done what everyone is doing to respond to Covid: increased cleaning, social distancing reminders, and tables spaced farther apart. Some tenants shifted online, like Cookology with its virtual summer cooking camps.

Others, such as Ice Cream Jubilee, tried curbside pickup.

While Ballston Quarter’s ultimate fate lies in the pandemic’s end, the project itself succeeded in activating a long-underutilized site at one of Arlington’s busiest intersections. It brought together the private and public sectors, as the county supported the redevelopment with $10 million in direct funding and $45.5 million in tax increment financing. It turned an imposing block of Wilson Boulevard into a lively, open stretch. And its mere construction spurred several other developments nearby.

The redevelopment of Ballston Common was a long time in the making. For more than 10 years, the owner worked to acquire the Macy’s Furniture Store site, vital to making the project whole — that property is where Origin, a new 406-unit residential building, now sits. It all stemmed from a design that opened the project to the street, forming the crux of its placemaking strategy, said Carmen Strauchon, development associate at Brookfield.

Add in games at Punch Bowl Social, escape rooms at 5Wits, cooking classes at Cookology and minimalist play center Nook, and the shopping mall becomes more than a place to pop in for some shoes — it’s an experience, said Toby Millman, Brookfield’s senior vice president of development.

“We wanted vendors who were up and coming,” Millman said, “and local favorites that also provided as much diversity as possible.”