Another massive project is going up near Reston’s Metro station. Three prominent developers are in the mix. 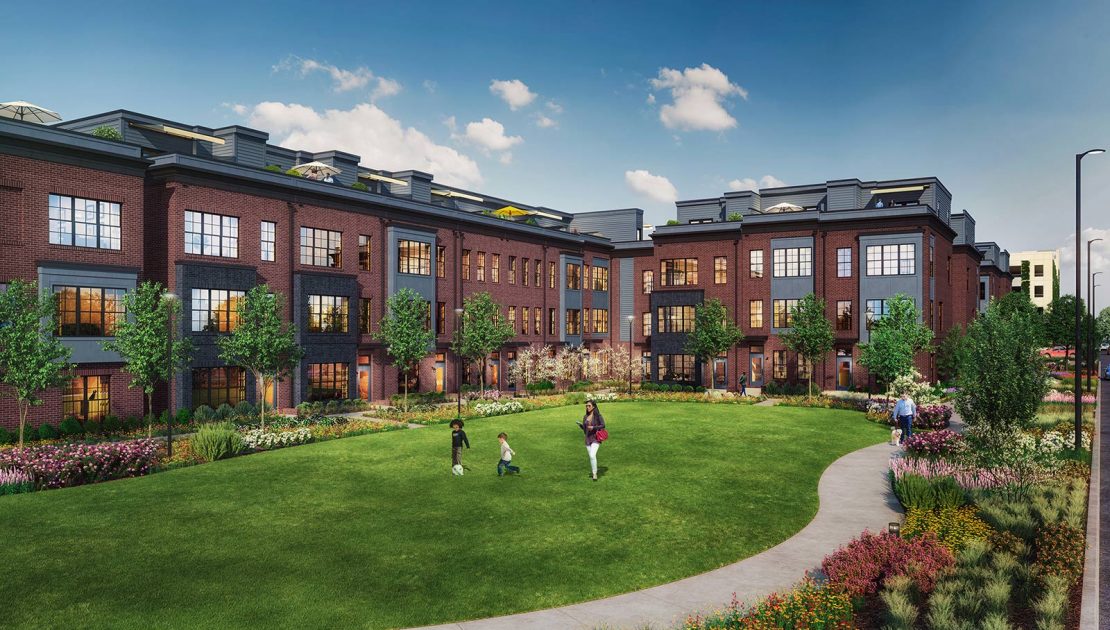 Construction is beginning on a massive redevelopment project just across from the Wiehle-Reston East Metro station, as EYA advances one piece of a mixed-use makeover of an aging office park.

The Bethesda developer just broke ground on 115 townhomes anchoring one section of the project, dubbed the “Reston Midline,” which  will include close to 1.8 million square feet of development on 18 acres by the time it’s finished. EYA is hoping to deliver 80 of its newly

christened “Townhomes at Reston Station” by sometime in early 2021, then the remaining 35 in a second phase.

The property sits across Wiehle Avenue from the Metro station and Comstock’s towering Reston Station development and is bounded by the Dulles Toll Road and Sunset Hills Road.

EYA will also build two multifamily buildings on the site, partnering with the Chevy Chase Land Co. for one of them, delivering 300 units and up to 20,000 square feet of retail in total. And another prominent developer is in on the action at the property: JBG Smith Properties. The company controls the western section closest

Work on those subsequent phases have yet to start, but when it’s completed, the “Midline” will cement this section of Reston’s transformation from a sea of suburban office parks into a dense, mixed-use community. Between Comstock’s portfolio of projects and other approved entitlements, there’s more than 3 million square feet of development either completed or in the works for the area adjacent to the Wiehle-Reston East Metro.

“Reston has a unique history as a thoughtfully planned mixed-use suburb and we are delighted to have secured this site,” EYA President McLean Quinn wrote in a statement. “We are actively seeking other sites along the Silver Line to bring more ‘life within walking distance’ to the region.”

EYA will extend Michael Faraday Drive north-south through the site, and Reston Station Boulevard will be expanded east-west. JBG and EYA also hope to install several “pocket parks” and add a connection across Sunset Hills Road to the W&OD Trail.

Fairfax County officials expect the changes will help to build out the area’s full transportation network, especially with more development on the way on the other side of Michael Faraday Drive. Pulte Homes is building a mix of townhomes and apartments on one parcel, while Rooney Properties is doing the same on another.

But Comstock is the prime driver of development in the area. The company’s expansion of Reston Station, the Reston Station Promenade, will include another