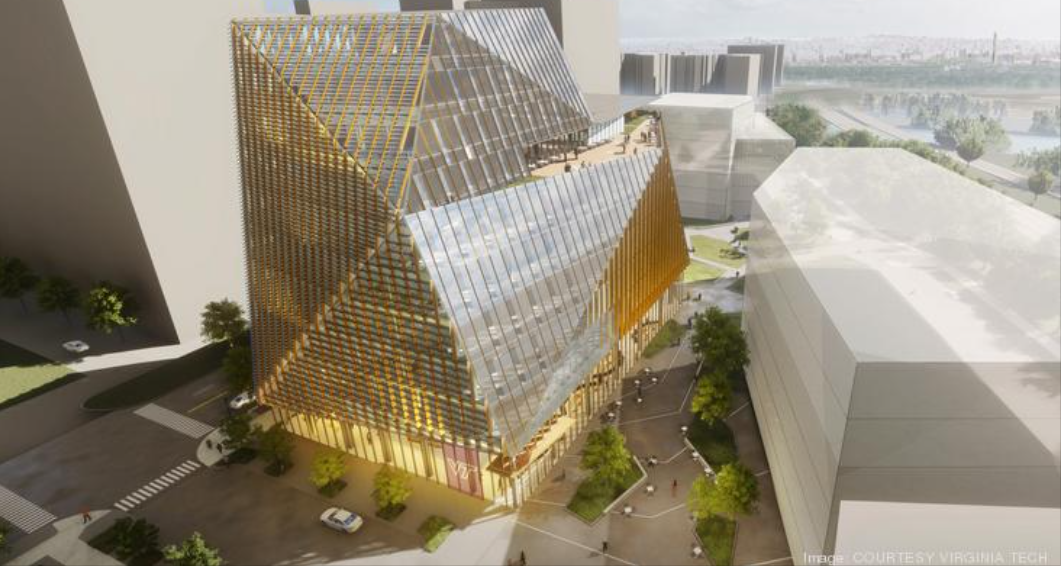 When determining where to locate HQ2, Amazon landed on Northern Virginia in 2018 partly because of the state’s promise to fuel higher education and build its tech talent pipeline. Virginia Tech secured the initial funds for its “Innovation Campus,” which the school had also long dreamed of building, because of the state’s eagerness to win HQ2.

But where exactly Tech’s campus would sit in National Landing didn’t become clear until June 2019, when the university locked down a site in North Potomac Yard.

Tech’s buildings there will anchor a mixed-use redevelopment of the 18.7-acre Regal Potomac Yard parcel — the property closest to the future Potomac Yard Metro station.

How important was this campus to landowner Lionstone Investments, developer JBG Smith Properties and institutional investors advised by JP Morgan Asset Management? Enough to give the land away.

It wasn’t the site it had initially eyed.

On the same day HQ2 was announced, Virginia Tech tentatively identified Oakville Triangle, across Route 1 from Potomac Yard, as its future home. But university President Timothy Sands and others soon reached the conclusion that the largely industrial site didn’t have enough space for future growth.

Tech would ultimately cancel its memorandum of understanding with Oakville Triangle developer Stonebridge and property owner Blackstone Group, dealing that project a significant setback before the pair landed an Inova HealthPlex this past March as their new anchor tenant.

Houston’s Lionstone and Bethesda’s JBG Smith offered an ideal alternative to Oakville. And JBG Smith, which had ties to Amazon already as both its HQ2 landlord and development partner in neighboring Arlington, was able to snatch another monster win with its play to anchor North Potomac Yard with the university campus.

The Potomac Yard site provided Tech exactly what it needed: the space to grow and to be part of a mixed-use ecosystem of offices, residential and retail. It also brought the university closer to the Metro station it hopes will eventually carry its name.

The partners have moved quickly to entitle the site for the initial buildings, which Alexandria is expected to approve this fall. Architecture firm SmithGroup landed the job of designing the academic building, a $275 million facility that will provide space for industry, faculty and students to collaborate on the technology of

tomorrow. Ground is expected to break in the summer of 2021, with its opening in February 2024.

The planned 180-foot-tall Tech building will stand out architecturally — with a gem- like shape to maximize the amount of sunlight it captures and photovoltaics to capture the sun’s rays and turn it into energy. People walking by the glass facade will see “science on display,” Kevin Johnson, a principal at SmithGroup, explained during public meetings.

“Our goal is to create a community that is embedded into the community and not a walled-off ivory tower,” Brandy Salmon, Virginia Tech’s associate vice president for innovation and partnerships, said of the campus in late 2019.

Virginia Tech has leased roughly 5,000 square feet inside the National Industries for the Blind headquarters building just south of its future campus. The school welcomed its first class of graduate students in August, but not to that space — or any other. Due to the coronavirus pandemic, classes were entirely online this semester.