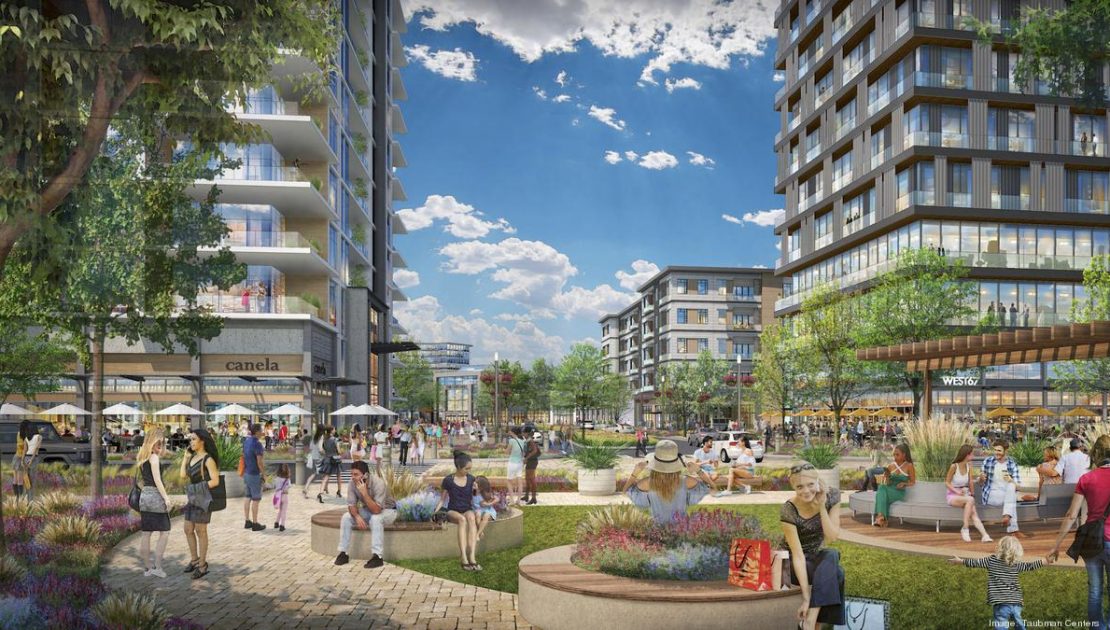 Picture this: Someday, you could wake up in your new apartment at Fair Oaks Mall, take a stroll over Interstate 66 and through Fairfax Corner and meet a friend living next to the Fairfax County Government Center. Later, the two of you could hop on the Metro for a ride into D.C.

Fairfax, but that’s the vision county officials and developers are slowly working to make a reality. There’s no telling when, exactly, all these pieces may fall into place, but some changes to this “Fairfax Center” area are starting to become a reality.

Broadly, the goal is to engineer the sort of transit-oriented, mixed-use transformation of the neighborhood that has revitalized other parts of the county.

The government center could be the first property to see changes, via a plan to redevelop some of its parking lots into affordable housing. Fair Oaks will be evolving too, as the mall’s owner, Taubman Centers Inc. (NYSE: TCO), takes the next steps on a mixed-use makeover to compensate for changes in the retail sector that were apparent even pre-Covid 19.

Beyond those major shifts, the future is a bit murky — the county has long planned to bring a new Orange Line station to the area, but that remains more of a distant

goal than anything approaching an imminent reality. Still, officials believe they’re teeing up a future development hub for the county with the work they’re pushing forward now.

“We have an opportunity to make this Fairfax County’s, Northern Virginia’s or even the D.C. region’s next great place,” said County Supervisor James Walkinshaw, D- Braddock, who represents sections of the area west of I-66. “The pieces are there to do that and they are starting to fall into place.”

Housing in an oﬃce park?

Walkinshaw is hoping to make immediate progress on transforming the government center complex, currently home to a sea of parking spaces that often go unused.

He notes that the county has increasingly been looking for ways to utilize government property to address Fairfax’s affordable housing needs, and he thinks this site represents the ideal opportunity on that front. He’s currently advancing a plan that would transfer the ownership of some of those lots to the Fairfax County Redevelopment and Housing Authority, which could accept bids from an affordable housing developer to form some kind of public-private partnership for the land.

Walkinshaw said county staff are still working out the exact details, but he said the westernmost portions of the parking lot along Government Center Parkway make the most sense for this process. The size and scope of any potential project is unclear, but Walkinshaw hopes to get the ball rolling before the year is up.

“Right now, that is very much a 9-to-5 office park occupied entirely by county employees,” Walkinshaw said. “Turning that into a neighborhood would be a huge opportunity.”

Walkinshaw envisions a mix of homes that are affordable to county workers — with rents affordable to people making around 50% of the area median income — allowing people working at the government center or the other county facilities in the area to live a stone’s throw from the office. He’s even pushing for some ground- floor retail to provide another option for county employees who have grown weary of the government center’s cafeteria.

“Once you have that, you start to have a little bit of activity on the site, and that opens up the door for everything else we’re working on,” Walkinshaw said.

Just across I-66, Taubman is envisioning a very similar transformation at the Fair Oaks Mall, which was built back in 1982.

The shopping center’s owners have been considering a move to mixed-use for some time now, securing a key change from the county last year. Supervisors agreed to slash minimum parking requirements at the mall, opening the door to new development on the property’s parking lots.

Taubman is now taking the next step in that process, advancing an amendment to the county’s chief land-use document, the Comprehensive Plan, to change the exact mix of new development allowed there.

There’s barely any residential allowed on the property right now (about 200 units) but that would shoot all the way up to between 790 and 1,200 multifamily units under Taubman’s proposal. The changes would allow another 1.7 million square of development to the site in total.

“This is about reinventing a more typical 1980s suburban mall and making something better,” Calabrese said. “This is really a natural evolution for an important regional center.”

The county’s Planning Commission will review those changes for the first time Wednesday, setting up a Board of Supervisors hearing on Nov. 17. Supervisor Pat Herrity, R-Springfield, said he is eager to see the changes come before the board, noting the Covid-19 crisis has added “new urgency” to the process of rethinking the major shopping center in his district.

That’s not to say any redevelopment will happen overnight. Herrity noted that Taubman doesn’t control the whole site, which “complicates” this process. The owners of the Lord & Taylor and Macy’s department stores will likely have a role to play. Lord & Taylor filed for bankruptcy last month and is going out of business, closing all its stores.

Calabrese cautioned that this is likely a “10-to-15-year process,” so there will be plenty of time to work out the kinks. The comp plan changes are an incremental step in allowing redevelopment, as the board will also need to approve specific entitlements for any new construction.

All involved in this effort agree the new housing and office bound for the area will only be successful if transit options are part of the equation.

Walkinshaw is optimistic a new “transit center” planned for the corner of Monument Drive and Government Center Parkway can be part of the solution. The nine-story, 820-space commuter garage will be a prime hub for new express bus service that comes online with the widening of I-66 outside the Beltway and provide space for carpooling, perhaps giving future residents of these new homes a bevy options to cut back on their driving.

“Soon this will only be a short bus ride from downtown D.C., and that should be another catalyst for the area,” Walkinshaw said. The Planning Commission will also review plans for that facility Wednesday.

Calabrese also hopes to improve Fairfax Connector service on the property as it redevelops, arguing that “we don’t need Orange Line service to make this transit- oriented and mixed-use.” That being said, he added that none of Taubman’s plans preclude the eventual expansion of Metro to the site either, and the county has long set aside space in the I-66 median for a new station.

Metro officials have frequently cautioned it will focus on existing infrastructure needs before it considers another suburban expansion — and that was before the pandemic sapped WMATA’s coffers. But Walkinshaw said the county’s position remains that “ultimately, we need rail in the I-66 corridor,” even if the journey may be a long one.

“We’re excited about the expanded bus opportunities here, but we absolutely do not see that as a substitute for rail,” Walkinshaw said.

Herrity suggested another potential use for that median space perhaps alongside a Metro station, or in place of it: a development of the space over I-66 in an “air rights” deal. While the economics might not make sense yet — a recent state study suggested land values aren’t high enough to justify the sale of such rights — Herrity said the idea could transform the area in the long term.

“This could basically join Fair Oaks and Fairfax Corner,” Herrity said. “Wouldn’t it be great to connect these two great town centers?”