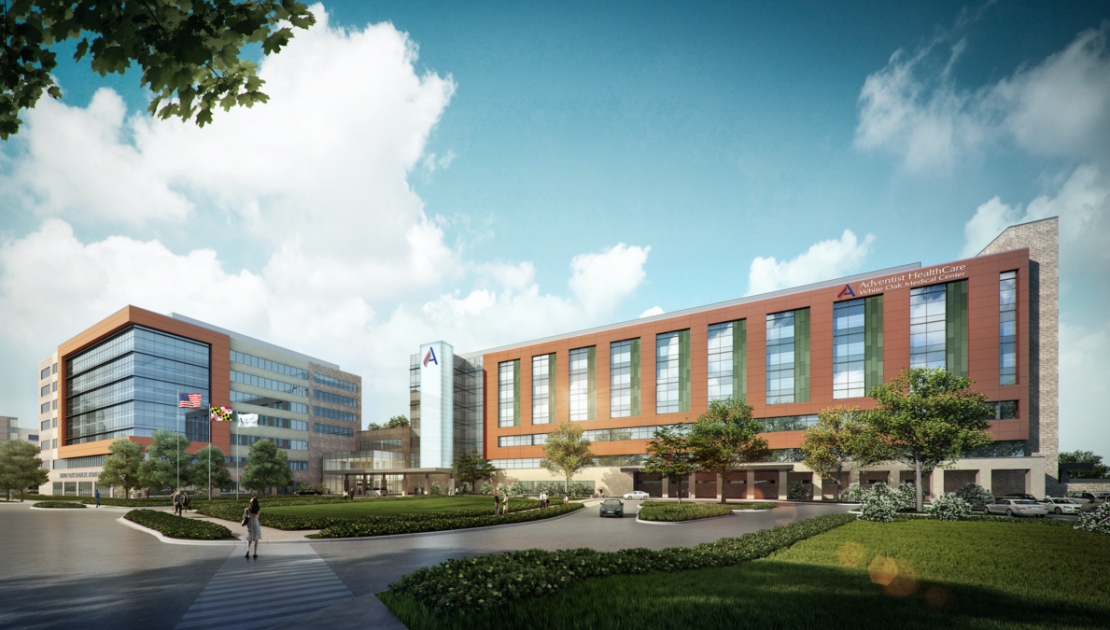 Adventist HealthCare’s oldest hospital was on life support.
The nonprofit health system began efforts to replace Washington Adventist Hospital, its aging Takoma Park facility, in 2011. But it took four years and a decision to scale down the proposal and leave components in Takoma Park to even earn county approval for the new project — and yet another four to bring it to fruition.

The 2019 opening of Adventist HealthCare White Oak Medical Center marked a major milestone for the Gaithersburg system in a year of sudden growth.

Medical Center, a more than 472,000-square-foot, 180-bed, $400 million acute- care facility that delivered at 11890 Healing Way in August 2019. Its opening marked a major milestone for the Gaithersburg system in a year of sudden growth

— and for a burgeoning patient base that quickly realized its need this year.

The White Oak hospital introduced new service lines, new space and new technology in addition to the operations and 1,350 employees Adventist brought from its former Takoma Park hospital. That transition involved an elaborate one-day move to ensure no lapse in care. It required staff to transfer patients safely and carefully to the new property, to train and adapt to the new floor plan and workflow, and to adjust to new technology.

“The story of the move has now become legendary,” said Anthony Stahl, who became the hospital’s president months later.

But that was before the pandemic.

About a week into Stahl’s leadership, the coronavirus became a public health crisis. Adventist suspended elective surgeries, implemented a new visitor policy and invested in its Covid-19 response. And White Oak sat in one of the top hot spots for coronavirus patients, “so we had a high volume at certain times, especially back in April,” Stahl said. “Our staff worked to save lives. And they did just that.”

The project’s outpatient pavilion, a building next to the main hospital, was delayed from its intended spring 2020 opening amid the pandemic. Its first occupants, primary care physicians, are now moving in, to be followed by the cancer center.

“We had to pivot in every way, and it did create some delay,” Stahl said. “But now we’re here.”

It’s not done quite yet. Adventist has earned approval to add an eighth floor on the hospital’s south tower because “we believe our challenge isn’t so much growth, it’s capacity to sufficiently take care of our community,” Stahl said. That multipurpose space will house acute-care beds that could be turned into another intensive care unit, “where we had our largest volume of very ill [Covid-19] patients” in the spring, he said.

The hospital as it stands now has 28 intensive care unit beds, 16 intermediate care negative pressure beds, 22 maternity beds, eight observation beds on medical- surgical units and an emergency department with 32 treatment bays and 12 additional observation beds. Plus, Stahl said, the hospital, which sits on a roughly 50-acre parcel, could add two more pavilions and more beds down the line as the community grows.

White Oak was just one of a few recent moves by Adventist to broaden its regional footprint. Last year, the system acquired the 37-bed Fort Washington Medical Center — its first push outside of Montgomery County and into Prince George’s County — and now manages Howard University Hospital in the District, with an option to acquire it outright in the future.

The Traffic Group The Walker Group